This drone photography of El Nido in the province of Palawan in the Philippines is a great piece of art to behold.

The aerial view of the location depicts an extraordinary splendour ecosystem. The beautiful blending of the sea and the protruding mountaineers land mass on the foreground adds to it a unique beauty that is rare to find anywhere else.

The several boats dotting the shoreline with physical structures at the centre of the focus creates a presence of life within the mountaineers land mass. This also depicts some sense of activity on the shores of this great looking place. 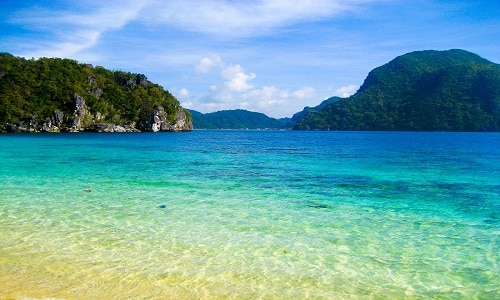 The use of drone aerial photography has enabled this scenery to be captured in an angle and altitude that cannot be shot from traditional ground photography.

The photographer enables the viewer to see this scenery from a totally different perspective and to a greater detail.

The focus is given more to the foreground which is actually the subject of interest according to this photo; this gives it a sharper and clearer look as compared to the background.

On the other hand, the further you move towards the distant background, the images become snowy and seem to fade away into the horizon.

This feature gives this photo some depth and one can easily tell which objects are further away from the photographer.

It is not lost to note that the photographer has used the skyline in a manner that it enhances more beauty to this photo shot.

The lighter shades of blue in the horizon give more clarity to the distant mountains and make them a bit visible. It is also very clear that this aerial photography must have been done during the day when the sun was at an angle in the sky.

The shadows on the right side of the mountains depict this, furthermore, they are considered helpful in identifying features since they show the familiar side view of objects.

These photo objects are relatively large and clearer in the foreground meaning that the altitude at the time of shooting it was not so high.

From this aerial photograph of El Nido, the lens that was chosen for this mission was just perfect for this job. There are several types of lenses available and in this photo shot; most likely a wide-angle type of lens was used.

As depicted, such a wide area has been covered, wide-angle lenses provide a large depth of field and hence making it simple to have both foreground and background in focus.

The clear blue waters indicate that the aerial photography was conducted in perfectly calm weather and on a sunny day. It is clear also from the shot that this location is dotted with islands and islets as can be seen from the left background.

The photographer is also able to capture minute details such as the slight waves on the blue waters. This is a clear indication that the place is abuzz with activity as there is a movement of boats in and out of the shoreline.

Though not very clear to see, the island has a white sand beach that adds more beauty to the overall look of this photograph.