Shooting aerial photography is a skill that must be mastered to produce the best results. There are many books and tutorials out there filled with a lot of information on this subject. 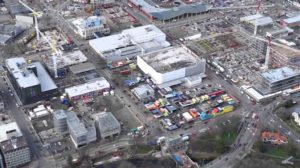 More often than not, though, the overload of information can seem daunting for aerial photography beginners, so much so that many shy away from even trying.

The following provides a quick guide that will get you up in the air and start taking great shots in no time.

For a beginner, the biggest obstacle that gets in the way of taking perfect aerial photography is the proper positioning in the sky for the subject matter. Any great photo has a focal point which refers to the main object the photographer intends to take a shot.

Most of the rules that apply to ground photography are also the same from an airplane, placing yourself in an opportune position in a 3D environment is key to capturing your subject matter perfectly.

Before embarking on any aerial photography mission, it is very important to undertake a proper planning from the ground as this is a step towards achieving a special success.

The first step to take that will influence the outcome greatly is the type of aircraft to use. If you are in a rural setting, then you would probably be choosing a Cessna 152or 172 but if you are in an urban setup, then a helicopter such as Robinson R-22 would be considered.

Most of the time, shooting from a helicopter increases the chances of having good shots except when you want to shoot a large area from a high altitude.

Arrive at the FBO in good time

Another important pre-flight item is to arrive at the FBO at least 30 minutes early prior to the scheduled time of your flight.

You need time to seat with the pilot and brief him on your plan and be able to be on the same page with him before taking off to the skies.

Since most pilots have not flown aerial photography missions before, they need to understand ahead of time the uniqueness of your requirements.

Spend at least 15 minutes talking to the pilot as you seat on the left side while still on the ground, take time simulating how you will be working with your camera. Sitting on the left allows you to turn at ease with the camera.

Wings with struts and wheels can be an obstruction

Shooting around the wing and wheel of the aircraft may pose a challenge while leaning out the window. It is very important for the pilot to have a mental picture of this as they have control over placing a clear space directly in line with your target object and at the correct angle.

You will be asking your pilot to fly actively’, constantly banking, yawning and pitching the aircraft so as to accommodate your clear shooting window.

After formulating a game plan with your pilot, you will most likely be going for wide landscapes shots as opposed to the zoomed in shots architecture.

By having the pilot fly at the lowest possible altitude, you will get the most dynamic photos. By so doing, it adds depth by keeping the horizon in the shots. With the wing on the way, you will at times realize the challenge of getting the horizon you want in your shots.

It is at this point that you need to constantly keep communicating with the pilot and letting him know when to lift the wing at the exact moment you see your subject matter within good view.

You should note that since the plane is turning all this time, the pilot would not be able to keep the wing high for too long.

Use the right optic lenses

One of the major things to consider before going for an aerial photography session is the type of lenses you will need.

But since this is your first go and you don’t need to worry about depth of field, the standard kit’ lens with any SLR body will do just fine. The trick is to shoot with the fastest shutter speed your lens can accommodate.

It is worth noting that most aerial photographers like to set manual focus and tape the lens to infinity though autofocus works fine in today’s cameras.