Most photographs taken in aerial photography is a work of art taken from a different perspective, it requires the same set of skills as those needed in ground photography.

But what sets this type of photography apart is the perspective from which an object is viewed from. This photograph of Abalone point located in an exclusive area of the Irvine cove community in Laguna Beach, California is such a site to behold. 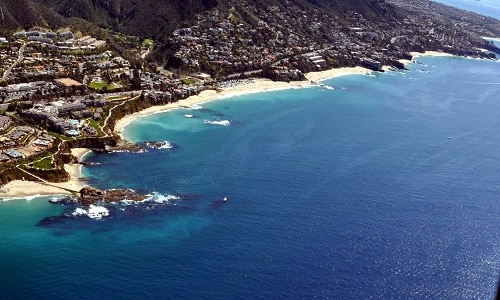 What draws the attention of the viewer to this photo is the large breathtaking at the focus that cascade down to the water body in the foreground.

To capture a marvel such as this photo, the photographer must position the camera at a high altitude above the subject matter; this can only be possible by use of an aerial vehicle such as an aircraft or better yet through drone photography.

There are quite a number of intriguing features in this photo; the main aspect of photography that can be observed is the angle at which this photo was taken from. It has perfectly captured the natural features that have blended so well to create such a serene and natural look.

The sea front blends so well with the mainland that constitutes some steep cliffs that protrude into the water whereas at some section it ends on the white sand beach.

From this photo, it is clear to see that the area is full of life as depicted by the cluster of settlements to the far left of this photograph. This neat combination of various physical features makes this photograph exceptionally beautiful and attractive.

Perhaps what’s so amazing is the homes built on top of these cliffs and can give 180-degree panoramic views.

It is obviously clear that this photograph was shot on a sunny day when the sun was at an angle in the sky. This is depicted by the shadows cast by objects such as the trees and the buildings atop the cliffs hence giving it a natural look.

The natural sunlight has been used to portray the different shades of colors to the physical features. For instance, the varying shades of blue have clearly brought out the depth aspect of the water body, in fact, rocks beneath the seabed can clearly be seen.

The white splash of water while hitting the edge of the cliff and at the beach clearly shows that there is a wave shifting the water to and fro.

The lens used to capture this photograph was just right as it brought clear and precise results. This clarity is depicted by the waves that can be clearly seen in the blue water along with the natural green vegetation on top of the inhabited cliffs.

The low altitude at which this photo was taken from has also made it look much closer and can reveal more details such as being able to identify single objects such as trees. Irvine cove Laguna Beach photograph shows an example of a low altitude aerial photography.

The two cliffs protrude into the water and hence form a small bay area which has created a small beach as shown at the top center of this magnificent aerial photograph.

Use of drone photography has brought forth a new way of capturing amazing photographs from angles that were never possible with the traditional ground photography.