With the advent of new technology, drone photography has made viewing of the earth from different extremely spectacular angles possible. Aerial photograph of Mount Hood’s summit shown is breathe-taking and simply beautiful. 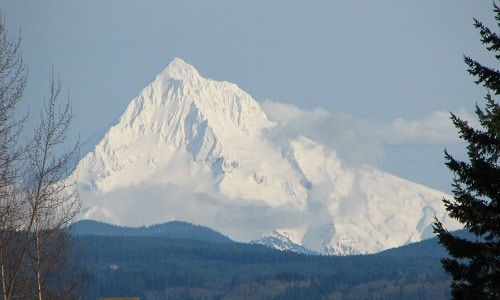 Some of the great aerial photography techniques have been used to enhance the overall success of presenting this photograph to the viewer.

Considering the fact that aerial photography can present it challenges and rewards, this photo is exceptionally excellent as the focal point is good.

It is clear that the attention of the viewer will be captured by the feature at the foreground of this picture. Moreover, the aerial side angle at which it was shot enables it to be viewed from a 3-D perspective and hence presenting a perfect image.

By using an oblique type of aerial photography, the photographer has blended well both the high mountain peak at the foreground and the distant low-lying background.

The use of the horizon in this beautiful aerial photo makes it so dynamic in that it has added depth; the wide landscape shown in the background makes it look more natural and fantastic.

You will realize that the shot at this angle gives more detail about the height of Mt. Hood’s summit; it is obvious it is a high altitude peak as depicted by the wide landscape at the background. The shade of blue color also indicates that the landscape is a bit further from this peak on the foreground of this picture.

From this photo, it is worth noting that the camera used for this aerial photography mission must have been of good quality.

The kind of lens that was used had some kind of optical stabilization which facilitated to the success of this outstanding photograph of Mt. Hood’s summit.

This is depicted by the sharpness and the great clarity of the main subject matter, it is so clear that you can see the varying texture of the snow formation on the peak.

Choosing the right time of day to take an aerial shot of this mountain peak has also contributed immensely to its success, the lighting effect created a reflection on the white snow and giving it the magnificent glow and improving its general look.

It can be noted too that the photographer took this shot on a sunny day and facing away from it. The little shadows on the raised snowy parts can clearly portray this fact and hence creating a natural look and enhancing its beauty.

The contrasting color of shiny white of the snow on the mountain summit and the varying shades of blue on the distant background evokes a sense of depth.

These gives the picture a unique serene look and making it stand out with. It is also very clear from this photo that once in a while there is the formation of glaciers that tend to slide down the summit.